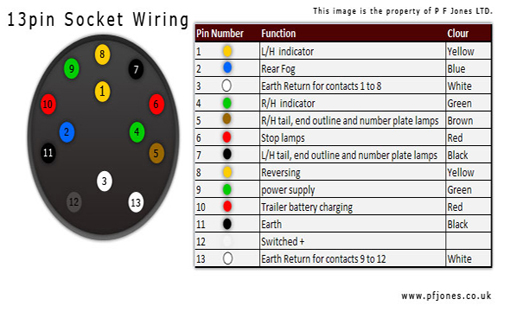 13 pin electrics kit are standard in most other countries and will eventually replace the 2 separate sockets used in this country. All caravans manufactured in the UK from late 2008 will be fitted with an ISO 13 pin connector as standard. This is used if your caravan is imported and is fitted with a 13 pin plug. It must also be used on some vehicles especially with detachable tow bars when there isnt enough room to mount 2 separate sockets. 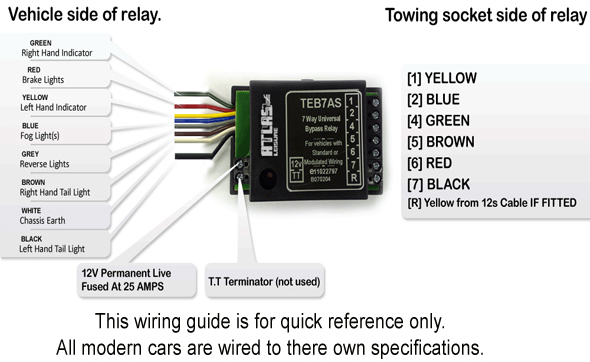 Good morning I want to order a tow bar wireing kit for my 2014 citroen c3 picasso and wonder if your universal kit 13LK-TT117 would be suitable as opposed to the dedicated kit that then has to be programmed . Many thanks Bob broughton.

Hello Mr Broughton, Yes you can fit universal electrics to any vehicle but it's not recommended on the Ford Transit custom or the 2017 Mercedes E class. It will void any warranty on the vehicle though. Thank you.

Hi, i have a 2014 j11 Nissan Qashqai and am looking to purchase a towbar and a 13 pin electrics kit. Will your universak 13 pin kit fit this vehicle and does the kit come with the split charge relay? Thanks for your help

Hello Mr Davies, Yes the universal kit will fit, and it will come with the split charge relay. However, fitting universal electrics on any vehicle will void the manufacturers warranty. There is nothing wrong with the kits themselves, but main dealers don't like it if you splice into the vehicle wiring. Thank you.

Hi there i recently purchased a detachable towbar with twin electrics from yourselfs for our Subaru Forester sti. Ihave changed my mind on the electrics and would like to have a 13 pin instead. can you tell me what i need please? I also need opposite plug for my Teardrop camper. Many thanks Alan

Hi Alan, yes this kit in question would be suitable and the product number for the 13 pin trailer side plug is MP128B thanks.

Hello I want to fit a kit to a Hyundai Terracan is your product suitable . Also is a indicator sounder included . Many thanks Graham

Hi Graham, yes it would be suitable. All the bypass relays have a indicator buzzer built in. Thanks.

Hi Alan, yes a 13 pin kit with a bypass relay would be suitable and work just fine for any Audi A3. Thanks.

Hi, I bought a towbar inc 7pin socket from you last year and need to upgrade to 13pin, my car is a Hyundai IX35, 2012 plate, is this kit ok for towing a caravan or is their another none I will need, my van has ATC fitted as standard. thanks Ian.

Hello Mr Nelson, I searched our sales with your email to see what you ordered last year but didn't find any transactions. Please can you tell me if you bought the universal kit or the dedicated kit? thank you

Hi, I have recieved your 13 pin kit (ref on the packet xpf 3813b) and was also advised to order a bypass relay which you sent marked TEB7AS. Only the 13 pin kit has a wiring diagram and it does not show how to connect the TEB7AS with it. Please could you email me a wiring document showing how to connect the various components. May thanks. I have looked on your web site but the colours don't seem to match. Thank you

Hi Ged, Sorry but I don't have a full instruction booklet but here is the wiring diagram for the TEB7AS bypass relay.

Hi Mike thank you for your email The diagram you sent is for a 7 pin socket not 11 (but I can figure the difference out).. The bit I was struggling with was the integration with the other relay and the audible component. No worries, I think I have figured it out, though it would be nice to have a diagram with all 3 components connected. Many thanks

Hi Ged, Here is the image for the 13 pin socket and here is the wiring for the split charge relay that I send to your email address

Hi can I use bypass relays for a citroen ds4 or must it be dedicated wiring kit?

Hi Steven Yes you can use a bypass relay on a DS4, but it may invalidate your Citroen warranty. If you require the rear parking sensors to cut off & you don't have a switch on the dash, then you will need the dedicated kit

Hi. Does the universal bypass kit include battery wiring for a power connection, or how is the pin 10 power supply powered? Also, is there a detailed installation guide available? Thanks Des

Hello Des, No wire is provided for the power feed. Wiring instructions can be fould here http://www.pfjones.co.uk/tow-bar-electrics.html thank you.

Hello, Could you please tell me if I need a bypass relay for a 2009 Mazda 6 estate 2.2D TS? Thanks Regards Dan